Pamper yourself with fun and luxury at the famed Boston Harbor Hotel, offering top-rated 5-star waterfront accommodations and acclaimed onsite restaurants overlooking Boston Harbor on one side and the stunning Rose Kennedy Greenway park on the other side.

In addition to being one of the city's most luxurious hotels, Boston Harbor Hotel - or BHH, as it's known locally - offers several bonuses you should know about: the internationally renowned Boston Wine Festival running from winter through early spring, and its popular Summer in the City program with music on the Blues Barge, movies, and dancing overlooking the Harbor.

Boston Discovery Guide is a user-supported website.  When you buy through our links, we may earn a commission.  Learn more

The hotel's location is another big bonus.  Walk out the front entrance, and all of the recreational offerings along the Greenway are at your fingertips:  lush gardens and fountains, a seasonal Beer Garden featuring local craft brews, summer concerts, and plenty of places to sit, relax, and soak up the sunshine.  On the other side of the Greenway, you'll find Boston's downtown Financial District.

At the hotel's harbor-side entrance, you'll find a convenient water taxi stop (Logan Airport is less than 10 minutes away by water), nearby piers where you can hop on Harbor cruise boats, plenty of restaurants and other attractions, and one of the city's best Boston Harbor views.

Best of all:  The comfortable seating on Boston Harbor Hotel's own terrace where you can relax with a frosty beverage while enjoying the fantastic views.

What to Expect at the Boston Harbor Hotel

A stay at Boston Harbor Hotel gives you a resort-type experience in the middle of the city.  Each of the hotel's 262 elegant but comfortable guestrooms and suites feature waterfront or city skyline views, and the staff gets accolades for their attentive, personalized service designed to make you feel pampered.

If you arrive in Boston at Logan Airport, just hop on a water taxi and you'll arrive at the hotel's dock at Rowes Wharf in less than 10 minutes.  If you drive, you can park in the hotel's own underground parking garage, which is one of the easiest in the city to navigate (if you've ever parked in other Boston garages, you'll fully appreciate the one at BHH).  Arriving in your own yacht?  Check with the hotel about getting a guest space in the Rowes Wharf Marina. 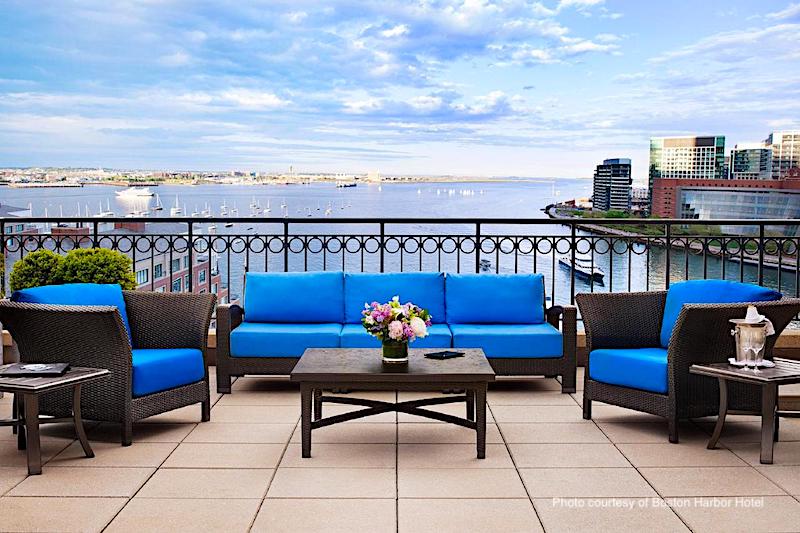 Once you check into the hotel, you'll find everything you might want right at your fingertips, including an excellent fitness center with an indoor pool and spa facilities.

You'll also find three top-ranked onsite places to drink and dine:  the cozy club-like Rowes Wharf Bar, the Rowes Wharf Sea Grille where you can dine on superbly prepared fresh seafood while overlooking the water from the light-filled dining room or from the outdoor terrace, and in your room or suite.  For a special treat, go for the afternoon tea at the Sea Grille featuring fancy sandwiches, pastries, and gourmet teas.

Each year, from late January through late March, Boston Harbor Hotel hosts the internationally-acclaimed Boston Wine & Food Festival.  The 12-week program features dinners and luncheons where the hotel's Executive Chef pairs top wines from around the world with menus he creates especially for each meal, as well as wine tastings, seminars, and a Visiting Chef Series.

Seasonal Events along the Waterfront

The Boston Harbor Hotel is also known for the many fun events, pop-ups, and concerts it stages along its expansive terrace overlooking the waterfront which entertain guests as well as locals.  Check the hotel's events calendar to find out what's on.

Attractions near the Boston Harbor Hotel

The Boston Harbor Hotel's waterfront location between the North End/Downtown Waterfront and Seaport neighborhood positions you close to many of the city's top attractions around the Harbor.

To get a unique view of the city, take a sightseeing cruise around the Harbor or a whale-watching cruise to the Stellwagen marine sanctuary.  The New England Aquarium is also near the hotel.

Art lovers can view contemporary art at nearby ICA Boston on the Seaport waterfront, and explore galleries in the nearby Fort Point area - the FPAC Gallery at 300 Summer Street is a great starting point.

During the summer, Leader Bank Pavilion concerts feature top performers on the waterfront.

If you're visiting with your family, spend an afternoon at the Boston Children's Museum, a big favorite with the 10 and under crowd.

Keep in mind that Boston Common, the historic Freedom Trail, Faneuil Marketplace, TD Garden, and lots of other top attractions can be easily reached by a short ride on the Silver Line or water taxi. But if the weather is nice, walking from South Station is faster (8-10 minutes).

Which Rooms have the Best Views at the Boston Harbor Hotel?

Ask for a room on a higher floor to enjoy the best city skyline or Harbor views.

Harbor views are nice if you wake up early and want to enjoy the sunrise over the water.  But if you're going to be there in the evening, the city skyline sunset views from this hotel can be spectacular.

Getting to the Boston Harbor Hotel from Logan Airport

If you're arriving at Boston Logan Airport, getting here is easy.  The quickest way is just hop on a water taxi, tell the dispatcher you're heading to Rowes Wharf, and you'll zip across the Harbor.  Unfortunately, it operates only until 6pm during winter months and 8pm during the summer, so if your flight arrives later, you'll need another option.

More about where to find Boston water taxis at the airport

In terms of speed and convenience, the second best choice is to use a ride service such as Uber, a taxi (just look for the signs in the airport to the taxi queue), or ask the hotel's concierge to arrange a private car service to meet you.  Be aware that Boston's notoriously snarled traffic can sometimes take awhile to get through.

There are two other options for reaching the hotel, but both have major drawbacks:

Map Showing the Boston Harbor Hotel & Other Nearby Hotels

Enter your travel dates to get the most accurate hotel rates.  If the Westin Waterfront doesn't appear on the map, that means it's fully booked for your dates - so check out rates at other nearby hotels.


More to Do & See in Boston