Top Things to Do in Boston in March

The Boston Events Calendar for March 2023 is packed with fun things to do, including Dine Out Boston, the Saint Patrick's Day Parade which normally which attracts around 1 million spectators, and the kick-off of whale-watching cruise season.

Look for exciting shows in Boston's Theatre District and plenty of concerts by top performers, including multiple Dropkick Murphys on and around St. Patrick's Day.

You may even feel the first hints of spring - and enjoy the return (maybe) of warm weather.

Check out all our top recommendations for fun things to do in Boston in March, make your hotel reservations (you'll find some very attractive rates) - and start planning your visit now!

Boston Discovery Guide is a user-supported website.  When you buy through our links, we may earn a commission.  Learn more

Boston's famous St Patrick's Day Parade takes place in South Boston ("Southie"), and starts at the Broadway T station on the Red Line.   The route has been shortened this year to about half its usual length.  (to be confirmed)

See our recommendations for the most convenient places to stay

Other Popular Cruises on the Northern Lights:

Top concerts in Boston in May 2023 include the Dropkick Murphys annual St Patricks Day shows and Bruce Springsteen and the E Street Band - plus lots more to enjoy throughout the month:

Boston Concerts throughout the Year

Boston whale watching cruises start on March 18.  (to be confirmed)  Don't wait to get your tickets!

These exciting excursions last about 3.5-4 hours and take you through Boston Harbor and out to Stellwagen Bank, a protected marine area 25 miles east of the city.  Marine biologists or naturalists serve as guides to make sure you don't miss a thing.

Be sure to bring your camera!

Get your whale watch tickets and reservations

Where to have dinner in Boston's Theatre District

Enjoy your Boston performance or show experience to the fullest when you stay in one of the nearby Theatre District hotels, such as the luxurious Hyatt Regency:

The Red Sox typically play their home field season opener at Fenway Park in early April each year.  But this year, their home opening game at Fenway against the Baltimore Orioles happens on March 30 - see available seats and get your tickets.

Twice each year, you can enjoy fine dining at fixed prices at the best Boston restaurants.  Sample the latest "hot" restaurants, visit old favorites, and explore a few places you've never tried before.

Check for participating Dine Out Boston restaurants, meals offered and costs, and other information.  And don't forget to check our tips for getting the most value out of Dine Out Week! 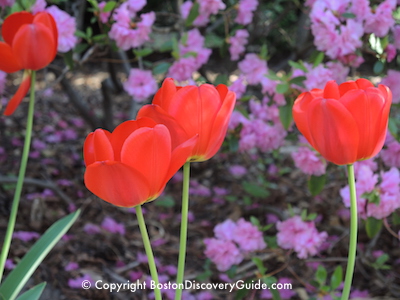 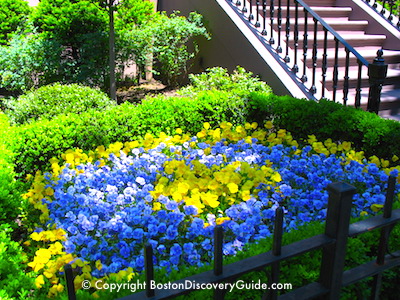 Where to See Spring Flowers in Boston 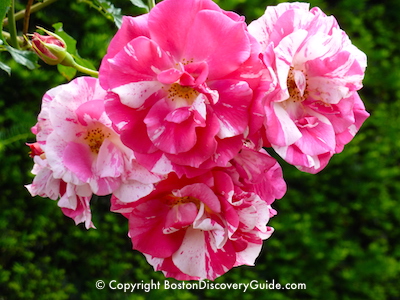 Just a couple of hours before the big St Patrick's Day Parade starts on Sunday, March 19th, the St Patrick's Day 5K Road Race kicks off at 11am from the Edgerley Family South Boston Boys and Girls Club at 230 6th Street.

Head over to cheer on the 1,750 runners, who are carrying on a long tradition - this race first started back in 1940.  You can identify the first 650 entrants by their official long-sleeved race shirts designed by one of the race's most famous sponsors, the Dropkick Murphys, Celtic punk rock group with Southie origins who will again be playing their annual St Pat concerts in Boston this year.

Live performances by South Boston kids and teens will had to the fun.

Sponsorship money and donations raised by the marathon racers goes to support South Boston youth programs.  More details and registration at the South Boston Boys and Girls Club website (click "Get Involved").  If you don't want to run but want to help, they're also looking for volunteers!

Get your Boston Bruins tickets for March home games, and head over to TD Garden for some fast action on the ice.

The Garden's convenient location next to North Station and close to Faneuil Marketplace makes it super-easy to get to.

Coming to an event at the Garden?  Spend the night or the weekend at a nearby hotel, such as the glamorous Onyx (shown in photo), part of the Kimpton hotel family:

More top hotels near the Garden:

Their Boston shows usually sell out far in advance - maybe because their "Shipping Up To Boston" song is practically the city's official anthem.  So don't wait to get your tickets!

You can cheer the Boston Celtics home games at TD Garden throughout March - so be sure to get your Celtics tickets, wear green, and go support our home team!

Tickets are affordable, TD Garden's central city location is super-easy to reach (just take the T to North Station), and plenty of neighborhood sports bars and clubs mean you can have a lot of fun before and after the game.

Get your Celtics tickets now

Where: TD Garden
Nearest public transportation:  Green Line/Orange Line or Commuter Rail to North Station, next to the Garden
Where to stay:  Hotels near TD Garden

Popular Cruises on the Northern Lights:

A trendy vibe, "micro" guest rooms, and - dare we say it, cheap rates position the new Revolution Hotel as one of Boston's most attractive affordable hotels, especially considering its close distance (5-10 minute walk, depending on where you're going) to Downtown Boston.  Free high-speed wifi is a nice bonus.

Get your tickets in advance, or find out more about the Aquarium.  Admission also available through the Go Boston Pass, Explorer Pass, and Boston CityPASS discount cards.

Where:   Boston's Museum of Science
When:   Daily, 9am-5pm; open until 9pm on Fridays
Admission:  $29 general museum admission ($24 for kids; children under 3 free).  Get free museum admission when you have a GoBoston Discount card or Boston CityPASS card.
Imax Theater and Planetarium:  Additional fees apply

Not Sure about Boston Neighborhood Locations? 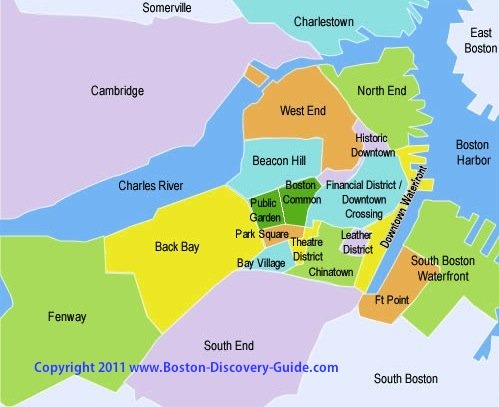 This neighborhood map should help you get oriented. You can find a list of top attractions in each neighborhood here.

Need a more details?  Here are our favorite free and low-cost Boston maps.

2 Easy Ways to Save BIG in Boston on Tours, Cruises, Admissions

Best way to save in Boston.  Save up to 50% when you take a Boston Harbor cruise or Duck Boat tour, visit Plimouth Plantation, the New England Aquarium, Museum of Science, Museum of Fine Arts, Fenway Park Tour, and more.   Compare to find out which one is best for you.

Boston has the best Irish pubs in the world, outside of Ireland - and almost as many to choose from.  Thanks to the large number of Boston residents who hail from the Emerald Isle, you'll hear plenty of Irish accents on both sides of the bar in many of these pubs.

Almost every Boston neighborhood has several or more Irish pubs - the Italian North End and Chinatown are the only 2 exceptions that come to mind.

Although some of these pubs feature live Irish music at least some of the time, almost all of them normally bring in terrific musicians around St. Patrick's Day.  Even without live music, though, you'll have a lot of fun!

Use our guide to Boston Irish pubs to find a spot to celebrate St. Patrick's Day - and be sure to wear green!

The Boston Underground Film Festival screens independent, provocative, and experimental films and videos that deliberately push the envelope in style, content, and form.

What can you expect to see?  An exciting mixture of experimental feature films, music videos, animations, documentaries, and shorts that celebrate and embrace the controversial, the confrontational, the political, and the alternative visions of their makers and their audiences.

If you're coming specifically for the festival, here are several hotels convenient to Harvard Square to consider:

Harpoon Brewery (306 Northern Ave, South Boston Waterfront) kicks off their St Patrick's Day Festival with a 2-day beer festival at their brewery featuring a large selection of Harpoon and UFO beers, handmade brewery pretzels and food for purchase, and non-stop live music from Joshua Tree, Colum Cille Pipes & Drums, Dicey Riley with Dicey Riley and the Celtic Rock Band, and other local bands throughout the weekend.

More Things to Do in Boston in March

March marks the beginning of spring in Boston - a perfect time to get out and see the city!  These fun trolley tours, bus tours, and special destinations let you enjoy the best of Boston!

March 5 marks the 250th anniversary of the Boston Massacre, an explosion of tension between Boston Colonists and the occupying British troops in 1770 that ended with five dead Bostonians and set the stage for the American Revolution five years later.

The annual reenactment during a day-long event on Saturday, March 5.  From 1pm-5pm, look for costumed reenactors portraying a variety of citizens from 1770 Boston who will share their experiences with British troops who landed in the city in October 1768 and stayed on as no-so-welcome "guests."  These historical vignettes will take place between in the areas along the Freedom Trail between the Old State House (206 Washington Street) and Old South Meeting House (310 Washington Street).

The Boston Massacre reenactment will take place near the Old State House at about 7pm.  For more information, see the event website.

If you're a fan of Brian O'Donovan's Celtic Sojourn program on Boston's WGBH radio or his Celtic Sojourn Christmas celebration, you'll want to be sure to get to his celebration of Irish and Celtic music, dance, and storytelling in A St. Patrick's Day Celtic Sojourn at the Somerville Theatre, plus four other venues in the Greater Boston/Worcester area.

The 4-day Boston Irish Film Festival at the Somerville Theatre in Davis Square will make you think you're back in the Emerald Isle. This year's fest features 30 Irish productions, with A Bump Along the Way directed by Shelly Love, The Last Right directed by Aoife Crehan, The Bird and the Whale by Carol Freeman, and 27 more films you may not see anywhere else in the US.

Films focus on Ireland and Irish culture, and what it means to be Irish in the 21st century.  More than 3,000 fans attend this popular film series.

Coming to Boston specifically for the Festival?  Here are three Cambridge hotels on the T's Red Line (1-2 stops from Davis Square, but also within easy walking distance) to consider:

The Boston Flower and Garden Show, which let us dream about spring as we gazed at the show's lush gardens and gorgeous floral displays, did not take place last year and plans for this year have not yet been announced.

We will are leaving up information about the previous show, in case you'd like to know what to expect if this wonderful event is scheduled again in the future.

Meanwhile, here are more ways to welcome spring to Boston:

Art, music, and a cash bar featuring signature cocktails, wine, and tapas provide the perfect setting for meeting up with friends and making new connections, relaxing, and enjoying the MFA's elegant ambiance.  Part social event, part opportunity to enjoy the Museum and the art within it.

When:  March 3, 6-9:30pm (and also the first Friday of most months)
Where:  Museum of Fine Arts, 465 Huntington Ave, Boston's Fenway neighborhood
Nearest T station:  Green Line/Museum
Cost:  Tickets required; get free ticket with museum admission
Must be:   21+
Boston Insider's Tip:  Arrive early to get your ticket - they do sell out for this event


More Articles about Things to Do in Boston