Easy recipes for a taste of Boston and New England cuisine

Use this easy Boston Cream Pie recipe to make the official Massachusetts state dessert.  This favorite treat has delighted Bostonians ever since it was created to commemorate the opening of the Parker House Hotel in 1856.

Originally, Boston Cream Pie was called Parker House Chocolate Cream Pie, but as you can tell by looking at it, it's actually a cake rather than a pie.  Back in the mid-1800s, many cakes were baked in round pie tins, which were called "Washington pie plates."  Today, this special dessert is a Boston and New England recipe favorite. 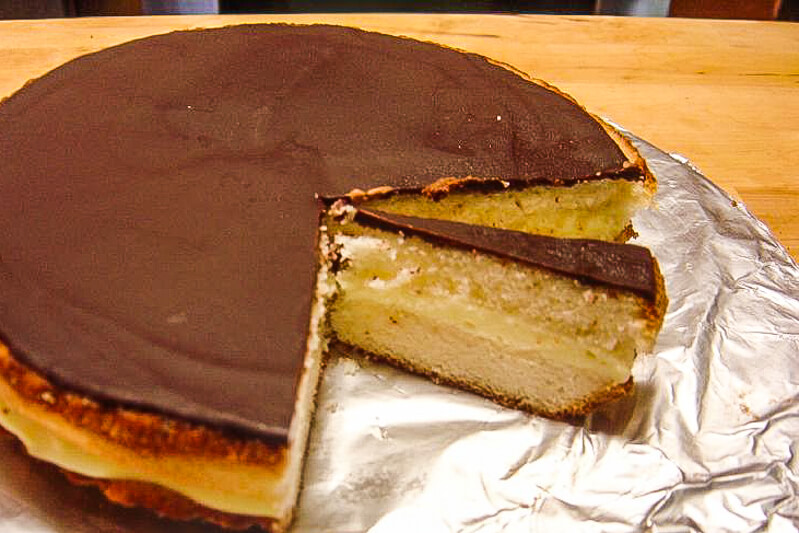 The Parker House's Chef Sanzian's creation was much more elaborate than the version that most restaurants and bakeries offer today.  Chef Sanzian was from France, and used elaborate French pastry techniques in his creation.

You'll be relieved to know that this Boston Cream Pie recipe is much simpler to make and produces the modern (and delicious!) version of the cake.  I'll even tell you about a couple of shortcuts that simplify the recipe even more.

But if you have the chance while you're in Boston, stop by the beautifully restored Parker House Hotel (now the Omni Parker Hotel Boston) for a slice where the original was served 150+ years ago - and has been a favorite ever since.

Boston cream pie consists of 3 parts: a 1-layer sponge cake, which you'll split with a knife to form 2 thinner layers; the creamy filling, and a chocolate ganache glaze.  In my opinion, it tastes even better the day after you make it, which means that it's a perfect make-ahead dessert for dinner parties.

Because the cake and pastry cream parts of this dessert should be cool when the cake is assembled, you'll need to start it 6 - 7 hours before you plan to serve it.

First, I'll tell you how to make each part, and then how to assemble the cake.

How to make the sponge cake

Because this sponge cake recipe contains 6 eggs and not too much butter, it's more nutritious than some other sponge cake recipes.  The eggs also make it fairly dense and therefore able to hold up under the weight of the cream filling. 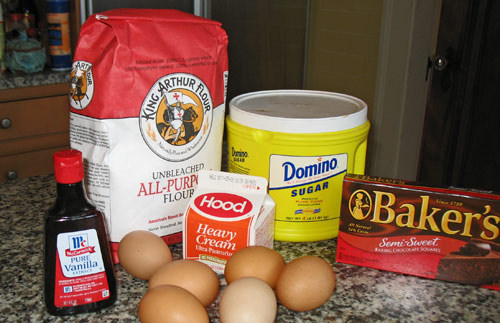 1.  Preheat your oven to 350°.  Put the butter into a small saucepan and melt at a low temperature.  Cool to room temperature.  Using the extra butter, coat the bottom and sides of the springform pan with the butter.  Lightly dust the inside of the pan with flour, and discard the excess.

2. Mix the egg yolks and sugar in the food processor until they turn pale and become thick.  Use a spatula to scrape down the sides of the processor bowl.  Add the vanilla and process for a few more seconds.  Add the salt and half the flour. Pulse 4 - 5 until it's just incorporated into the egg mixture.  Add the remaining flour, and pulse a few more times to incorporate.  Alternately, you can perform these processes with a mixer.  I use a food processor because it's about twice as fast.  If you use a mixer for this step, be sure to clean the beaters well before proceeding to the next step.

3.  Using the mixer with clean beaters, beat the egg whites until they form a stiff peak.

4.  Empty the egg yolk and flour batter into a large mixing bowl.  Add about 1/3 of the egg whites, and fold them into the batter with a few strokes of a wire whisk.  Add another third and fold in, and then add and fold in the final third.  Don't worry if the whites aren't thoroughly mixed in.

5.  Pour the room temperature melted butter on top of the batter.  Use your whisk or spatula to carefully fold in, being careful to not over mix.

6.  Scrape the batter (which will be thick) into your prepared springform pan.  Use your spatula to smooth the top.  Pop into the oven, and bake for 20 - 30 minutes.  When the cake is golden brown and springs back when the top is gently pressed, it's done.  Don't over bake, as that will make it tough and dry.  Take it out of the oven, remove from pan, and put on wire rack to cool. 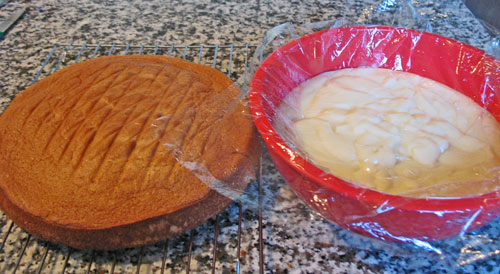 Pastry cream is a thick, rich vanilla pudding that contains small amounts of corn starch and flour to help it hold its shape under the weight of the top cake layer.

1.  Heat the milk in the sauce pan until it's fairly hot, but not boiling or scalding.

3.  Pour the mixture back into the sauce pan.  Heat it, stirring constantly with a whisk, until it thickens and comes to a boil. Continue to stir constantly while you let it boil for 3 minutes.  It will become even thicker.  Remove from the stove.

5. Refrigerate the pastry cream until it is completely cold.  The time required for this will depend somewhat on the temperature of your refrigerator, but count on at least 4 to 5 hours.  The pastry cream will keep in the refrigerator for 3 days, so you may want to make it on the day before you need it.

How to make chocolate ganache for the Boston Cream Pie recipe

This chocolate ganache recipe also works well for dipping fruit to make chocolate covered strawberries or other treats.  To make a chocolate dip for fruit (or even pretzels), use a 2:1 (chocolate : cream) ratio.

Chocolate ganache requires only 2 ingredients, and is incredibly quick and easy to make.  Although it's part of what makes this Boston Cream Pie recipe special, you can use it to top any cake.  Chocolate ganache always elegant, easy, and delicious.

Chocolate ganache becomes thick fairly quickly.  For best results, I usually make this right before I'm ready to put it on the assembled Boston Cream Pie. 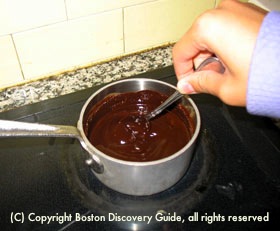 2.  Put the cream into the small saucepan. Bring just to a simmer over medium heat.

3.  Add the chocolate and stir until about half melted.  Remove from heat and continue stirring until smooth.  As it starts to cool, it will become thick.

How to assemble the Boston Cream Pie recipe

Assembly is fast and easy - figure that it will take you only 5 - 10 minutes.

1.  Slice the cake horizontally to make 2 layers.  Put one on a cake plate.

2.  Cover the cake layer with the pastry cream, bringing it right up to the edges of the cake.  The pastry cream layer should be about 3/4" to 1" thick.  It will soak into the cake very slightly, and will not be quite as thick once the cake assembly is completed.  If you have some of the pastry cream left over (I usually do), you can keep it in the fridge and have it later as a snack with some sliced strawberries and bananas.

3.  Put the second cake slice on top of the pastry cream, with the cut side facing down.

4.  If you haven't made the chocolate ganache in advance, make it now. 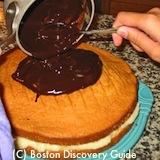 Scrape the chocolate ganache out of the bowl onto the top of the cake, and use the back of a large spoon or spatula to gently spread it out to the sides.  You can encourage a little of it to go down the side in places for an artistic effect. 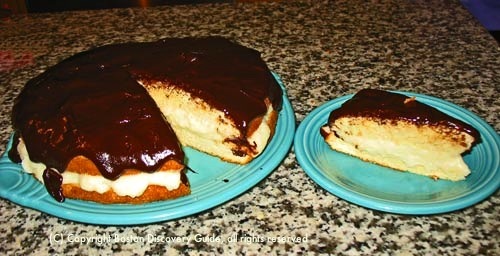 That's it!  You now have a beautiful Boston Cream Pie.

You can serve it right away, but the flavor is even better by the next day.  If you're making it a day ahead, cover it with plastic (once the ganache hardens) and store it in the refrigerator.  Take it out a couple of hours before serving to let it warm up to room temperature.

The original Boston Cream Pie created by Chef Sanzian at the Parker House Hotel was enhanced by the addition of rum.

You can do this too if you'd like.  When you're assembling the Boston Cream Pie recipe, drizzle the top of the bottom layer with a couple of tablespoons of rum or another favorite liquor (try Cointreau or another orange-flavored liquor) before adding the pastry cream.

Although this Boston Cream Pie recipe is already easy, you can take these shortcuts if you absolutely have to:

If you're like me, you'll find plenty of other uses for this as well.

More interesting things to check out: