From Broadway Shows to Avant-Garde:  Guide to Boston Theaters

Boston's vibrant theater scene includes more than a dozen major performance venues in the Downtown Theatre District, plus even more in other nearby Boston neighborhoods and Cambridge.

Choose top performances ranging from popular Broadway musicals to avant-garde experimental productions - plus opera, dance, comedy shows, and everything in between.

In July and August, Shakespeare on the Common stages a masterpiece by the Bard in a free "theater under the stars."

Use our Boston Theater Guide to find schedules and tickets (including discounts and half price tickets for some shows) for each venue.

Prefer to see all shows for a specific month?  Here's the monthly show calendar

This is where you can see Boston Ballet perform their famous production of The Nutcracker every year during November and December.

The ornate 1,700 seat Colonial Theatre (106 Boylston Street), owned by Emerson College, dates back to 1900 and holds the title as the oldest continually operating theatre in America (except for renovation closures).

The theater sparkles after multimillion dollar restorations with tons (literally) of crystal chandeliers, mirrors, hand-painted murals in the lobby, fabulous mosaic floors, and lots and lots of gold leaf.

But Colonial Theatre's fame comes from premiering pre-Broadway hits before they move to New York:  The Diary of Anne Frank, Porgy and Bess, Oklahoma!, and Annie Get Your Gun all opened here.

Enjoy your Boston performance or show experience to the fullest when you stay in one of the nearby Theatre District hotels, such as the hip and glamorous Revere Hotel:

Wang Theater (270 Tremont Street) seats up to 3,700 people, making it the largest performance space in the Theatre District.

This is where you'll see the huge extravaganzas by touring theater, ballet, and opera companies, as well as shows by famous performers.

Designed to emulate the Paris Opera House (Opéra Garnier) and Versailles, the theater has been extensively - and expensively - restored.

As you walk into the Grand Lobby, your eyes will immediately be drawn to the massive rose jasper pillars, lavish marble doorways, and the opulent painted ceiling punctuated with original gold-plated chandeliers weighing almost a ton apiece.

The 1,500-seat Shubert Theatre (265 Tremont Street) dates back to 1910 - the glory days of Boston theater, when it was just one of seven Theatre District venues owned by the New York-based Shubert brothers.

Multiple renovations have ensured that the cream-and-gold Shubert retains its original gleam and sparkle.  The ornate lobby and marble entrance area look unchanged.  When you attend a performance here, the Shubert's elegant, intimate interior will give you a glimpse of what gala evenings must have felt like here a century ago.

It was the first Boston building designed for electric lights, and is the second oldest theater in the Theatre District.

Because the Cutler Majestic was originally designed for opera, it's design eliminates support pillars, so sight lines from all seats are excellent.  You'll also appreciate the wonderful acoustics made possible by the lack of pillars.

The Paramount Theatre (559 Washington Street), owned by Emerson College, presents an eclectic line up of theater, film, dance performances in its 596-seat theater, "black box" space seating up to 150, and 170-seat film screening room.  If you're interested in experimental, contemporary, and avant-garde works, the Paramount is always a good place to start.

The historic Wilbur Theatre (246 Tremont Street) showcases top comedy and music acts almost every night of the year, although the theater once hosted pre-Broadway and off-Broadway touring productions.

Designed by architect Clarence H. Blackall and built in 1914, the Wilbur's Federal Revival style echoes Beacon Hill and stands apart from the ultra-ornate styles of other Theatre District venues.

Despite the Orpheum Theatre's name, you won't usually see theatrical performances at here . . . unless you consider rock concerts to be a form of theater.  However, you can hear world-class musicians in this rather special concert venue, site of so many epic Boston rock concerts during the past few decades.

Built in 1852, the Orpheum (1 Hamilton Place) is one of the oldest theater buildings in the U.S.  Originally called Boston Music Hall (no connection to The Music Hall, which is now the Wang Theatre), the Orpheum served as home to Boston Symphony Orchestra until 1900, when it was converted to a vaudeville theater and given its present name.

Despite a massive reconstruction in 1915, the Orpheum can reasonably claim to be the oldest theater building still standing in Boston, even though the Colonial holds the title for being the longest continuously operating theater.

The Orpheum looks small on the outside (partly because of the big yellow Corner Mall sign painted above it) and you can only reach it by walking down a short alley, but inside, it's huge, with 2,800 seats and legendary acoustics.

You will swear the seats haven't been updated since 1852 and with no air conditioning, the Orpheum can feel like a sauna.

But there's no place else quite like it, which is why Bruce Springsteen, Tom Petty and the Heartbreakers, The Police, Kiss, the Grateful Dead, U2, Lenny Kravitz, and the Allman Brothers are just a few of the performers who have put on iconic performances here.  Despite its size, the Orpheum's design and sound quality make it feel surprisingly intimate.

Both shows have played here for 30+ years, and still sell out due to hoards of enthusiastic fans.

What's the secret to their non-ending popularity?  Constant change, innovation, and plenty of laughs.  You can see the shows multiple times without getting bored.

Plenty of nearby restaurants and several of Boston's top clubs place the Charles Playhouse in a lively part of the Theatre District.

The Modern Theatre (523 Washington Street) owes its beginning to architect Clarence Blacknell who carved it out of a furniture store/warehouse built in 1876, added the elegant 2-story white marble Florentine Renaissance front facade you see today, and gave it its name.

Inside, the theater did not have a stage but instead boasted excellent acoustics optimized by a Harvard professor.

After The Jazz Singer, the first talking film, premiered here in the late 1920s, the Modern turned into a "talkie" cinema but by the 1950s, it started a long decline as an adults-only venue at the edge of what was then Boston's "Combat Zone" - the kind of place where moms had to cover their children's eyes as they walked past the posters.

By the time Suffolk University bought the dilapidated theater in 2007 to create student dorms, the space was considered beyond repair - but in one of the city's most challenging projects, Suffolk restored the Modern's classic facade while erecting an unobstrusive 12-floor dorm tower behind it.

Today, a 185-seat theater along with a lobby, balcony, and gallery occupies the first two levels of the building, with a grand curving staircase and hand-painted theatrical scenes on the walls.  You'll find an eclectic mix of theater and dance performances, poetry readings, lectures, and other programming here.

Enjoy your Boston performance or show experience to the fullest when you stay in one of the nearby Theatre District hotels, such as the fun and affordable Moxy, where theater lights and a food truck in the lobby pay homage to the neighborhood:

Use this Boston hotel map to find more places to stay near the Theatre District. Enter your dates to see best rates for available apartments, hotels, and inns.

Lyric Stage Company (140 Clarendon Street, 2nd floor), founded in 1974, is Boston's oldest theater company.  They produce seven shows reflecting a wide range genres and styles each season, with an emphasis on plays that are entertaining, challenging, and provocative.

Lyric Stage Company occupies  a mid-sized theater has a convenient location in the recently renovated YWCA building next to Copley Square.

You'll almost always see works by contemporary or modern playwrights, and an emphasis on established and emerging local talent.

Discount and half-price tickets are occasionally available to some shows at Groupon.

Theater in Boston: A Very Brief History from 1793 to the Present

Although troupes of traveling actors started performing in Boston in early 1700s (and possibly earlier), English Puritans living in the city managed to get the British-controlled Massachusetts General Court to officially ban theater productions in 1750.

After entertainment-hungry Bostonians finally overturned the ban in 1792, the city's first theater - Federal Street Theatre designed by prominent Boston architect Charles Bulfinch - opened in 1793.  Theater has been a continuing and important presence here ever since.

Today's Theatre District along Washington, Tremont, and Boylston Streets took shape during the 2nd half of the 19th century.  By 1900, 31 theaters clustered here, many of them including the Colonial Theatre, Metropolitan (now the Wang Theatre), Wilbur Theatre, and Modern Theatre designed by architect Clarence H. Blackall.  In all, Blackall designed 14 theaters in Boston (and 300 nationwide), including the Gaiety Theatre which was one of the few theaters in New England to allow African Americans to perform vaudeville; the Gaiety was demolished in 2005.

Soon after the beginning of the 20th century, first nickelodeons (coin-operated video machines) and then movie theaters began to threaten the popularity of Boston's theaters.  Although the number of theaters actually grew to over 50 in the 1940s, the Theatre District soon began a long decline, devolving by the 1970s into a seedy "adult entertainment" area known as the Combat Zone, characterized by peep shows, strip clubs, x-rated book and video stores, drug dealers, and brothels, with the area's historic theaters mostly closed and seemingly fit only for a wrecking ball.

But by the 1980s renovations began, and theater after theater turned on its lights again over the next 2 decades, as trendy restaurants and wine/coffee bars began to line the streets and luxury hotels popped up.

Today, Boston boasts the largest number of historic theaters in the nation, most of them beautifully restored and offering full seasons of plays, musicals, concerts, opera, ballet, dance, and comedy.

If you're visiting Boston, don't miss the chance to explore our Theatre District!  Get tickets for a show, dine in a nearby restaurant, stay in a Theatre District hotel, get a close-up view of the spectacular Wang Theatre on a behind-the-scenes tour.

Commonwealth Shakespeare Company erects a temporary stage on Boston Common for about 3 weeks each summer spanning late July - early August and gives free performances of one of Shakespeare's plays under the stars.

This beloved Boston tradition attracts 100,000+ people each year, and is the perfect way to spend a summer evening.

Even though Shakespeare wrote his plays more than 400 years ago, CommShakes gives them a contemporary twist in performances that are always entertaining, provocative, and compelling.

More about Shakespeare on the Common

Theaters Beyond the Theatre District

The American Repertory Theatre (A.R.T.) focuses on serious and sometimes edgy or experimental drama.  This is where you'll see plays by playwrights such as Samuel Beckett, David Mamet, Anton Chekhov, and Shakespeare.

Boston Center for the Arts (BCA)

BCA is home to several resident Boston theater groups and a number of other performing artists.  Calderwood Pavilion is also the site of the Boston Theatre Marathon held each May.

If you want to attend a play while you're in Boston and are flexible about what you see, you'll almost always find something interesting here that you might not have a chance to see anywhere else.  Look for social themes, experimental staging, and avant-garde sensibilities.

Tickets:  www.bcaonline.org; also check Groupon as discount or half-price tickets are almost always available for at least some shows.

Due a change in ownership, the BU Theater is expected to close for renovations after the current theater season; Huntington Theatre Company will move their larger productions to a different space (still to be determined) for the duration, and then return once renovations are complete.  At some point, the theater may be renamed.  So stay tuned as more details emerge.

Although the following venues primarily host sports events or concerts, they do sometimes present other types of performances such as Disney on Ice, dance, multimedia, or one-person shows by famous performers. 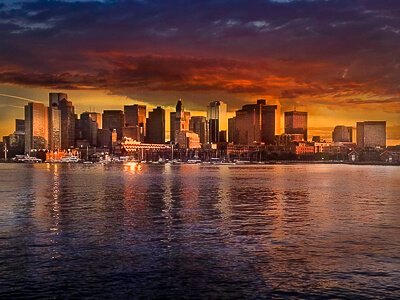 Shakespeare on the Common

Want to save on designer fashion at Boston's biggest discount mall located south of the city?