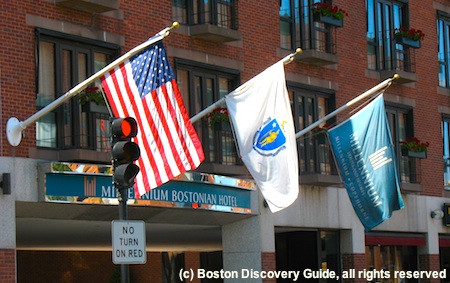 The Bostonian Boston Hotel, located in the heart of Historic Downtown Boston next to Faneuil Hall Marketplace, offers visitors exceptional value in one of the most expensive parts of the city.

But that's just one reason why the Millennium is the best Boston hotel near Faneuil Hall Marketplace.

Find out the other reasons to stay at the Millennium, especially if you're interested in easy access to New England Aquarium, TD Garden, Quincy Market, the North End, and other nearby Boston attractions.

Located in the city's Blackstone Block, a small remnant of 17th century and early 18th century Boston, the Millennium provides luxurious accommodations near Boston Harbor and the waterfront at attractive rates.

5 Reasons Why the Bostonian Boston Hotel
Gives You Exceptional Value

1. You get luxurious accommodations at non-luxury prices 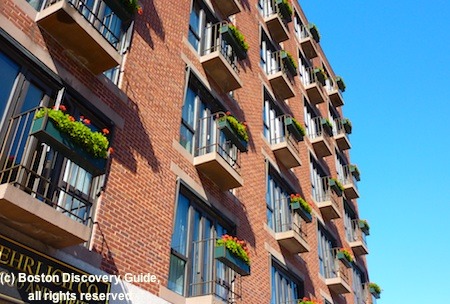 The Millennium's nicely decorated 201 rooms and suites offer you understated elegance.  As a bonus, rooms here are larger than in most other downtown Boston hotels, probably because the hotel dates back only to the 1980s rather than a century or so earlier.

The gorgeous red and black lobby feels more like a living room, with plush seating, a cozy gas fireplace, and book-filled shelves.

Yet rates here usually fall into an affordable range far below what you'll find for Boston's top luxury hotels.

2. The Millennium's location can't be beat!

Located in Historic Downtown Boston, the Millennium occupies an almost perfect location, right in the middle of Boston's top attractions.

Walk across the street, and you're in Faneuil Hall Marketplace, where you can enjoy top shopping at national and local stores, dine and drink outdoors during warm months, watch free performances on weekends, be dazzled by the huge Christmas tree and holiday decorations in late November and December, and ice skate in January and February.

Stroll over to the New England Aquarium on the Waterfront, saunter over to the North End for an espresso, explore the Freedom Trail, or walk over to TD Garden (about 8 minutes on foot) to watch the Bruins or Celtics play or enjoy a family-oriented circus performance or Disney on Ice.

Step outside the hotel on a Friday or Saturday, and experience Haymarket, Boston's colorful, centuries old outdoor produce market.

But don't worry about noise or congestion. The Millennium's circular design provides an enclosed courtyard and sheltered entrance. Step inside, and you'll feel secluded in a calm oasis - even though Boston's most exciting areas are just outside. 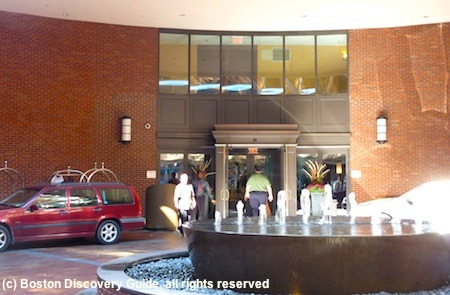 3. No need to spend money on car rental and parking

Because of the Bostonian Boston Hotel's central location, you won't need a car.  Due to the high parking rates in this part of the city (about $45/day at the hotel), you won't want one.

You can easily walk to all the top attractions near the hotel.  For those farther away, take the T (Boston's subway) from a station a block away from the hotel, or take a cab.

Getting to the hotel from the airport is easy, assuming your luggage has wheels and you don't mind a 5-minute walk.  Take a water taxi to Long Wharf, walk across the Rose Kennedy Greenway, and you're at the hotel.

Driving to Boston?  See my suggestions about how to avoid bringing your car into the city.

4. Lots of free entertainment nearby

Sure, you can spend lots of money on tickets to Bruins games, shows in the nearby Theatre District, and cruises around Boston Harbor - and you probably will want to do some of those things, because they're part of what makes Boston special and fun.

But you can also find plenty of free things (and almost free) to do nearby that may become some of your best memories of your trip to Boston. 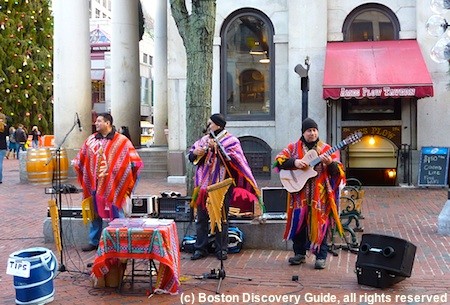 If you're traveling with children, enjoy a game of frisbee on the Rose Kennedy Greenway.  During warm weather, let your kids cool off in the huge splash fountain, or ride the carousel.

Walk over to the North End (about 5 minutes walk) on summer weekends and join in the feasts and festivals for patron saints.

During the winter, check out the concert schedule for King's Chapel. 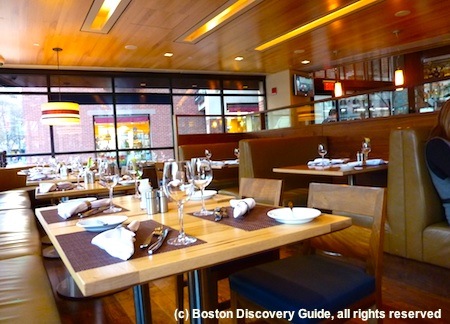 However, unless you live here, you may not know about North 26.  Consistently excellent and innovative cuisine served up here places it squarely in the "Boston insider secret" category. 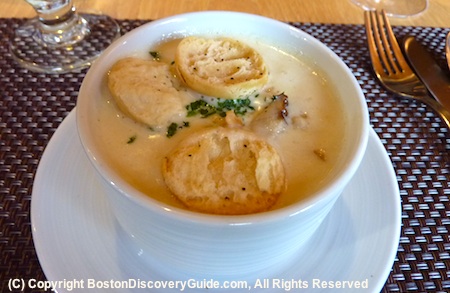 North 26 has been one of my own favorite restaurants in this part of Boston for quite awhile, partly because it makes some of the best clam chowder in Boston, full of tender chunks of clam, perfectly cooked potatoes, and flavorful bits of smoked ham rather than the traditional bacon.

You can sit in the casual area with booths and tables next to the bar looking out across to Faneuil Marketplace, or the more formal dining room at the back.

Of course, the historic downtown area where the Bostonian is located is loaded with excellent places to dine, and you should try some of them - but don't miss the chance to dine in North 26 and enjoy the best some of Boston's best cuisine without having to leave your hotel.


More to Know about the Millennium Hotel Boston

On-site at the Bostonian Boston Hotel:


More about the Millennium's Neighborhood 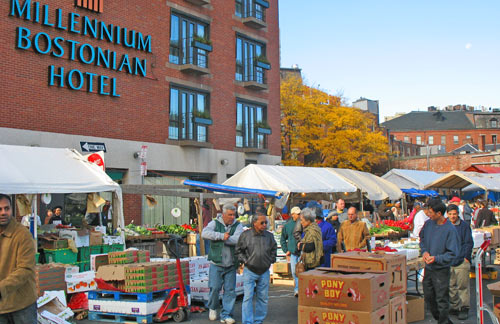 Interesting historical trivia about the Millennium:

More nearby hotels to consider . . .