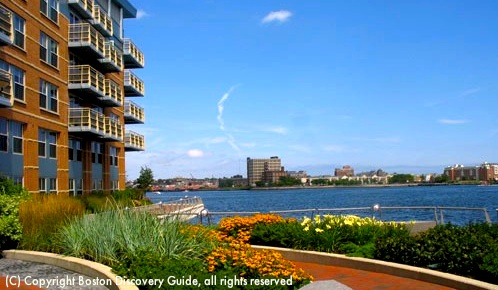 The Battery Wharf offers luxurious accommodations similar to what you'll find in other Boston luxury hotels, including those on the Downtown Waterfront.

You're in Boston's famous North End neighborhood, home to some of the best Italian and seafood restaurants in the city, along several Freedom Trail sites.

You can practically smell the delectable aroma of espresso from the neighborhood's small bakery/cafes, where you can sample cannoli and other fresh-baked pastries.

The Fairmont Battery Wharf is the only hotel in this popular and picturesque neighborhood, and is the perfect place to stay if you want to experience this special historic neighborhood fully - plus be close to TD Garden, Faneuil Hall Marketplace, and the lively downtown waterfront.

Read reviews of the Fairmont Battery Wharf by other travelers, and check rates 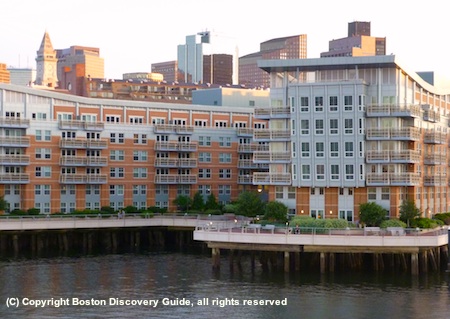 Here's another photo of Battery Wharf Hotel taken taken from a cruise boat in Boston Harbor
right before sunset . . . love the way it reflects the golden late-afternoon light

More about the Fairmont Battery Wharf

With only 150 rooms, including 42 suites, the Battery Wharf Boston almost could be considered a boutique hotel, especially because of the personalized service.

Because the rooms and suites, along with 104 residential condo units, occupy four new brick buildings on the North End waterfront, you'll feel like you're in your own waterfront residence.

As you can see from the photos on this page, many of the spacious rooms offer fascinating waterfront views and some have balconies.

For the ultimate luxury experience, stay in the Fairmont Gold building and enjoy the complimentary breakfast, dedicated concierge services, complimentary cocktail canapés, and a dessert buffet. 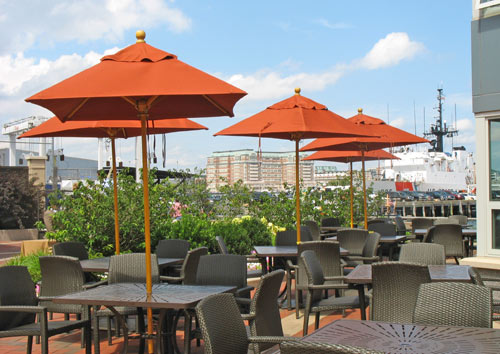 Patio seating next to the Fairmont Battery Wharf Hotel

On-site restaurant Aragosta serves Italian cuisine competitive with many of the neighborhood's renowned Italian eateries.  But with all the other wonderful restaurants in nearby Hanover and Salem Streets, you'll have plenty of choices! 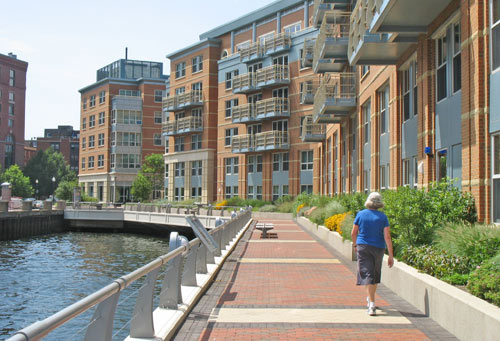 Harborwalk, next to the Fairmont Battery Wharf Hotel

Fairmont Battery Wharf's location on Boston's Harborwalk, a path along the waterfront, means that you have direct access to some of the best views in the city.

You can watch the sun rise over the harbor as you jog along Harborwalk in the early morning, and you can enjoy an evening stroll, perhaps stopping at a restaurant along the way, as the sun goes down. 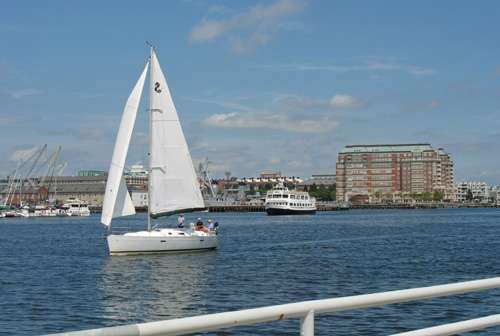 In addition, Fairmont Battery Wharf is in the perfect location to explore all of the restaurants and nightspots along Hanover and Salem Streets in the North End.

Several Freedom Trail sites are nearby, as well as other historic North End sites, including the spot where the Great Molasses Flood began.

To get an even closer look at the water, go on one of the Boston cruises that you can board at nearby Long Wharf next to the New England Aquarium (free admission if you have a GoBoston Card).

If you visit during the winter, throw your ice skates into your suitcase.  You can walk up Commercial Street to nearby Steriti Rink and go ice skating.

You can also easily walk to TD Garden to watch a Celtics or Bruins game, to Faneuil Hall/Quincy Hall Marketplace, and to the Financial District.  Here are the current Bruins and Celtics schedules for TD Garden:

How to Get the Best Rates at the Battery Wharf

Rates at the luxurious Fairmont Battery Wharf are often attractive, considering its stellar waterfront location in the North End.

As with all Boston hotels, be sure to look for any special deals and packages that suit your needs.  Finally, don't forget to check several sites for lowest rates.

If you bring your car, park in one of the lots along nearby Commercial Street for about $18/day vs. about $42/day at the hotel 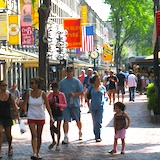 Best Things to Do